One of the most familiar saints to whom Mary appeared in an apparition is St. Bernadette of Lourdes. In the Marian apparition Mary appeared to Bernadette as the Immaculate Conception and asked her to have a chapel built in a nearby location that was currently a garbage dump. Today that location of the "Our Lady of Lourdes" shrine is one of the most visited places in the world where people go to pray for healing. Bernadette is the patron saint of Lourdes, France and of those with bodily illness, those ridiculed for their faith and shepherds and shepherdesses. This Prayer to St. Bernadette holy card is made in Italy, measures 2-1/2 by 4-1/2 inches and features the famous Fratelli-Bonello artwork embellished with gold trim. The card is laminated so it can be used for a long time. The front of the holy card has an image of St. Bernadette while the back of the card has a prayer asking for purity, simplicity and mortification so the one praying can obtain "the glorious vision of God and of Mary in heaven". The St. Bernadette card could be given to one who is suffering an illness, to one named Bernadette or to one who has chosen Bernadette as her Confirmation name. 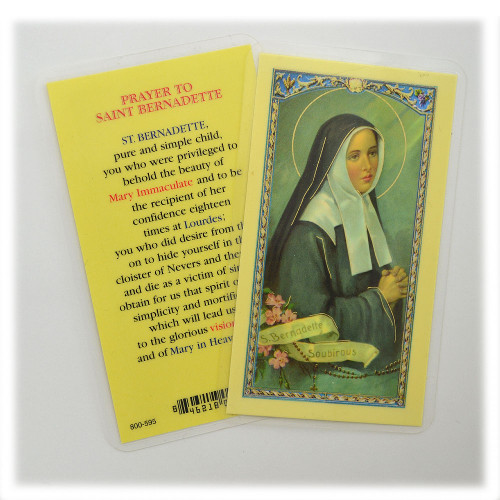