St. Michael is probably the best known of the Archangels. He is mentioned in the Christian scriptures in the Book of Revelation as the protector and leader of the army of God against the forces of evil. This holy card has a traditional image of St. Michael on the front where he is standing with his sword raised and his foot on the fallen Lucifer, the leader of the angels rebelling against God. The back of the card has a prayer to God asking that the one praying may be victorious over evil as was St. Michael. The card is laminated so should stand up to a lot of use.

St. Michael is known as a protector so has become the patron saint of those who serve such as the police, firefighters and those in the military. The holy card could be given as a sign of your concern to anyone involved in one of the service professions. Because it is laminated, it will serve for some time as a handy bookmark in a prayer book or bible. 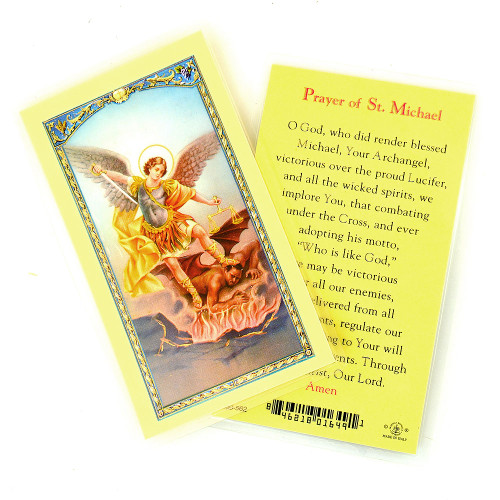 St Michael Prayer for Those in Service Holy Card