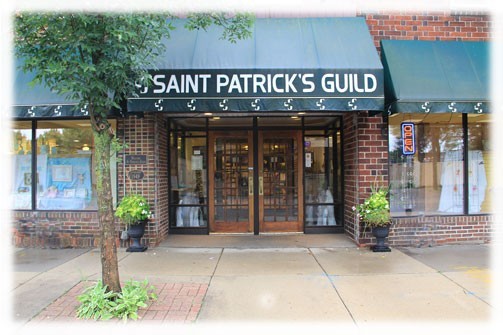 "I understand now one of the reasons your company has been in business for years;

it is your excellent customer service."

To inspire, supply and support faithful people and their communities.

Build strong partnerships with people of faith by loyally providing religious products and services required to fulfill their missions.

St. Patrick’s Guild is committed to being a partner in faith to share the love of God in this world.

We accomplish this mission by offering services and products to support church and school communities, religious organizations, those in religious life and the general public through our Church Supply department, website, retail store and catalogs.

That’s where our story begins. When local priests in St. Paul, Minnesota approached an unlikely soul to meet their need for supplying church pamphlets, Bob Doran said “Yes!” The year was 1947 and he was a 24 year old WWII veteran, newly married, and working at the St. Paul Catholic Youth Center. Bob cared about people and their needs so he couldn’t resist the challenge of stocking the racks in the back of the churches; thus St. Patrick’s Guild was born.

“St. Patrick’s” was chosen because of Bob’s Irish heritage, and “Guild” because he valued working with a team of people united towards a common goal. The basement of his mother’s house provided a humble beginning for Bob’s company, but he soon had over 100 churches purchasing his pamphlet rack service. Restocking the racks and collecting the coin box money provided a weekly exchange for Bob and his church partners that strengthened their relationships.

Bob took a leap of faith in 1949 when he incorporated St. Patrick’s Guild and opened a 1,000 sq. ft. store at the location of 1554 Randolph Avenue in the Highland Park area of St. Paul. Bob’s faith was well placed and his business grew enough to add a Church Goods annex in an adjacent home. This doubled the store size in 1958. His next leap of faith occurred in 1960 when Bob opened a Minneapolis store that flourished- however, when Vatican II arrived in the mid 60’s, sales stagnated for many Catholic stores. Bob had the heart to face the change and closed both his Church Goods annex and Minneapolis store.

As every family knows, life involves sudden turns that require much faith to navigate. The Doran family faced such a time in 1971 when Bob died at the early age of 48 leaving behind his beloved wife Norma and their 7 children. His oldest son, Mike, then had a call to answer of his own- he too said “Yes” to taking up the reins of Bob’s rich legacy and the next chapter of St. Patrick’s Guild began.

Over the next 30 years, Mike expanded the company by opening multiple branch locations including a store in the new Mall of America. He also co-founded Irish Indeed, an Irish imports company which today, has merged back in with St Patricks Guild giving us a strong Irish presence in store and online. The 80’s and 90’s brought growth to St Patrick’s Guild especially in the Church supply business. Many key employees were also hired in the early 80’s including Mark DePalma and Mike’s younger brother Tim - both of whom are still with the company today (2020). Mike and Mark along with Italian designer Angelo Gherardi, met the challenge of growing demand head on and, in collaboration with Henning Restorations, completed a number of Church remodels in the Twin Cities area and beyond. Angelo has since passed away but our renovation work remains strong with Mark DePalma, liturgical designer Alan Warmka and the great team at Henning Restorations. Mike Doran grew St Pats to a more regional and national level as the internet started and our world became smaller. The company aligned itself with The National Church Goods Association (NCGA) and soon Mike met some lifelong friends in Dan Stutte from St Louis and others. They formed a buying group of four stores called the St Louis Catalog Group and today, it is going strong with now six companies and the next generation leading the way.

In 1998, in collaboration with the City of St Paul, our St Paul location went through a major renovation. St Pats expanded to 10,000 square feet and constructed neighboring entities in Doran’s Deli and Irish Indeed. Mike and Tim’s younger brother John operated the deli, lifelong employee and friend Scott Wilhelmy operated the Irish store at the corner and the “mini mall” allowed customers to walk through all without going outside. The Irish Indeed store replaced the once famous Bridgemans Soda Grill which was run by Jim Weinberg - Jim and a number of his staff then came to work for St Patrick’s Guild after closing.

After 33 years as president at St Patricks Guild, Mike decided it was time for another chapter to begin. In 2004, Mike and his wife Jean sold the company to his brother Tim and his wife Barb. The early strategy was much the same - continue the company's strong church supply business,  operate multiple branch stores, and a strong website for inspirational shopping.

However, the great recession of 2008 changed everything quickly. Tim closed the branch outlets and consolidated in the newly renovated St Paul location. Servicing and supplying area churches continued to be the foundation of the St Pats story. Mark and his team continued to renovate area worship spaces and our annual Candle, Wine and Altar Breads sale turned into a two month summer project with multiple delivery vehicles getting the churches what they needed. As the internet continued to gain prevalance, St Pats shifted their focus to becoming more widely accessible on the web. St Pats launched a new website in 2015 and then moved to a more advanced web platform in 2020.

We lost Norma Doran, founder Bob’s wife; Mike and Tim’s Mom in 2019. Many life long employees are retiring or cutting back hours. To all of who have worked at St. Patrick’s Guild loyally for so many years, we are extremely grateful. Thank you for continuing the legacy. Tim’s son Rob is now in the business full time and he, family friend Matt Hambidge along with many others are more than capable of carrying on our great story. To you, our faithful customers - we wish to say thank you. Without you, there is no story.

In 1948, one year before launching St Patrick's Guild, Bob Doran and Father Otto Neudecker founded the Catholic Athletic Association (CAA).  Bob loved sports and envisioned an after school program whereby area youth would compete, make friends, stay busy and get some physical activity - there were no programs like this to speak of. Today, the CAA still thrives and along the way, Mike Doran and Tim Doran have both served as President and Tim is still an active board member.

St Patrick's Guild is proud of its relationship with the CAA and values tremendously what they do for our area's youth and their families - you can see more at stpaulCAA.org.

With deep appreciation, Your friends at St. Patrick’s Guild