St. Patrick's Guild offers a line of beautifully detailed pewter saint statues depicting the saints in poses with which we are familiar and, in many cases, including a symbol for which the saint is known. St. Joseph, also called St. Joseph the Worker, was the husband of Mary and is considered to be the earthly father of Jesus. The statue is made of fine pewter and stands 3-1/2 inches tall with the name of Saint Joseph and the words "the Worker" engraved on the base. Included with the statue is a laminated prayer card which contains prayers to that specific saint. The statue is presented in a window gift box that allows the statue to be seen while keeping it secure.

St. Joseph the Worker is the patron saint of many countries and many causes including workers and carpenters so the statue would be a nice gift to give to someone in one of those professions. Joseph is also considered to be the perfect model for a father so would be a nice gift for a new father or father-to-be. Some young men choose Joseph for their Confirmation name so the statue would be a lovely gift to give for that occasion. The size of the statue enables it to be easily displayed on a shelf, desk or table. 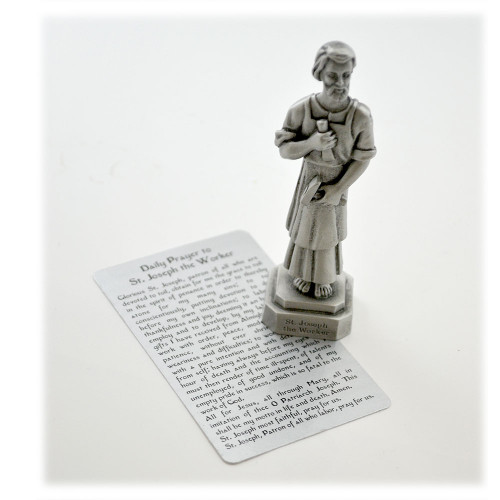