Pope Francis has brought a new sense of hope and love to the world and this is reflected in the image shown in this unique 8 by 10 picture. The picture features an image of Pope Francis smiling his gracious and friendly smile and giving the thumbs up sign. The image also shows the Pope wearing the cross he chose as his official pectoral cross which emphasizes the image of Christ as a shepherd and reflects the manner in which Pope Francis feels he should be leading the Church. The picture comes in an heirloom quality frame which has a series of three borders which include one with decorative beadwork, one with a brushed look and one with decorative scrollwork all of which adds to the beauty of the picture.

This is a picture you wil delight in displaying in your home as it captures the image the world seems to carry of the Pope, that is, gracious, hopeful, friendly, joyful and welcoming. It is a reminder of the faith, hope and love which are the three main ideas of the Christian faith that Pope Francis preaches. The Pope Francis picture would be a hopeful and nice commemoration to have of the visit of the Pope to the United States. 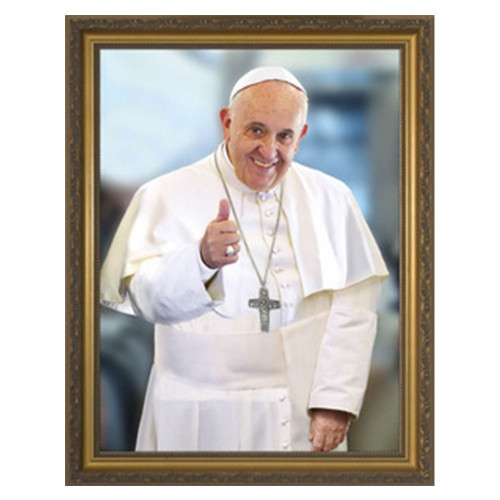